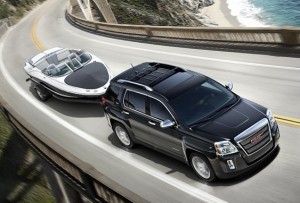 Ever since its arrival for 2010, the GMC Terrain has been a wildly popular choice for South Carolina drivers looking for the room and capability of a mid-size five-passenger SUV in a smarter, more efficient package.  While Columbia drivers flock to Terrain for a number of reasons including its impressive EPA-estimated 32 highway miles per gallon, others pick Terrain for its capabilities when towing a trailer.

Equipped with the standard 182-horsepower 2.4-liter four-cylinder, Terrain is capable of towing up to 1,500 pounds when properly equipped.  Featuring direct injection and variable valve timing, this Ecotec engine is designed to maximize fuel economy without sacrificing power.  While direct-injection engines have historically had the drawback of extra engine noise, Terrain features active noise cancellation using the factory audio system to counteract the additional noise to provide a quiet ride all through the highways of South Carolina.

Also available is a powerful 3.0-liter V6 engine making 264 horsepower and 222 pound-feet of torque.  Featuring the same direct injection and variable valve timing technologies found in the four-cylinder engine, V6-powered Terrain models are capable of towing up to 3,500 pounds when properly equipped.  In addition, the V6 engine is a flex fuel engine capable of running on blends of gasoline and ethanol up to E85, allowing Terrain to handle more sustainable fuels than pure gasoline in the future.  The V6 engine is available on SLE-2, SLT-1, and SLT-2 models in your choice of front- and all-wheel drive, and also offers an upgraded alternator and battery for added assurance on the road.

In addition, hooking up a trailer to the 2011 GMC Terrain is easier than ever with optional factory-installed trailering equipment (option code V92), which includes a class II 1-1/4″ receiver hitch and a four-wire connection.  Available on SLE-2 and all SLT models with either engine, it greatly simplifies getting Terrain ready to tow and ensures that all the components will be backed by GMC’s 3-year/36,000-mile bumper-to-bumper limited warranty. (Whichever comes first.)  Terrain also offers additional attractive features to make trailering easy, including a standard rearview camera to make backing up to hook everything up even easier, while available touchscreen navigation makes getting to your destination a simple process whether you enter the directions manually or by using OnStar service (standard for six months) to download directions from Google Maps, Mapquest, or an OnStar Advisor available at the press of the blue button on your rearview mirror.

When looking at the 2011 GMC Terrain, it’s important to seek out a professional grade GMC dealer to match your new professional grade Terrain.  Jim Hudson GMC in Columbia, South Carolina was the number one GMC dealership in the state for sales in 2010, and continues to be a leading GMC dealership in South Carolina.  Because Jim Hudson sells so many GMC trucks, vans, and SUVs, it is able to maintain a great selection of GMC Terrain crossover SUVs even in the face of high nationwide demand.  Jim Hudson GMC is located at 7201 Garners Ferry Road in Columbia, and can be reached by phone at (803) 783-0110.  Interested Columbia shoppers can jump directly to Columbia SC GMC Terrain inventory on Jim Hudson’s website.