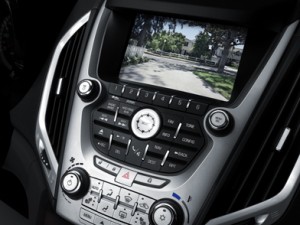 A seven-inch touchscreen will become standard equipment on the 2012 GMC Terrain.

Today, GMC announced the changes coming for the 2012 to the GMC Terrain, one of the most popular crossover SUV offerings in the Columbia, South Carolina area.  Terrain has been wildly popular since its arrival as a 2010 model thanks to its mix of premium features and compact, efficient packaging, and the 2012 GMC Terrain in Columbia SC will continue to expand on this successful formula.

The only change under the hood comes to the standard 2.4L, 182-horsepower Ecotec four-cylinder engine.  Capable of achieving an EPA-estimated 32 highway miles per gallon on gasoline, the engine now adds FlexFuel capability.  This allows Terrain to run on blends of gasoline and ethanol, up to a blend of 85% ethanol known as E85.  (For comparison, most gasoline today contains up to 10% ethanol with the aim of controlling emissions.)  By allowing Terrain to run on ethanol where it’s available, Columbia drivers can help reduce reliance on petroleum and potentially even save money should gas prices continue to climb.

On the exterior, new 18-inch chrome-clad wheels add a stylish touch to Terrain’s rugged styling.  Standard on top-shelf SLT-2 models and available on SLT-1 and SLE-2 models, these new wheels are bound to be a popular choice among Columbia’s drivers.  Two exterior colors, Cyber Gray Metallic and Merlot Jewel Metallic, will cease to be available in 2012; at this point, no new colors have been announced to add to the lineup.

Perhaps the most radical change for 2012 on the GMC Terrain is on the interior, where the standard audio system has been dropped for an all-new audio system featuring seven-inch touch screens across the board.  The popular USB port remains standard, and speed-compensated volume will ensure you’re able to hear every note as you roll down the highway.  This also provides an even better display for the standard rearview camera, which will now display on the touchscreen instead of on a display in the rearview mirror.  In addition, the comfort-grip vinyl steering wheel that comes on the entry-level SLE-1 model will receive audio controls for even easier command of the audio system.  (Previously, Columbia drivers had to move up to the SLE-2 model in order to receive it.)

Pricing has not been announced yet for the 2012 GMC Terrain, but that information will come out closer to the beginning of production on July 18.  The 2012 Terrain is available from Jim Hudson GMC, the #1 GMC dealer in the state of South Carolina.  Columbia drivers have trusted Jim Hudson for over 30 years to provide professional grade trucks and SUVs with a commitment to complete customer satisfaction.  In addition to being the top-selling GMC dealer in South Carolina, Jim Hudson has been voted Best New Car Dealership ten years in a row and counting by readers of The State.  Jim Hudson GMC is located at 7201 Garners Ferry Road in Columbia, South Carolina, and can be reached toll-free at (888) 377-4971.  For more information, visit Jim Hudson’s GMC Terrain Columbia SC page on their website.