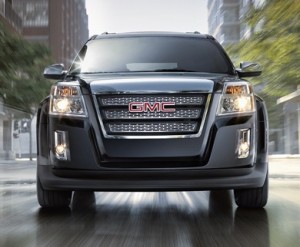 Jim Hudson GMC, which has served Columbia, South Carolina for nearly 30 years, is proud to announce that the 2011 GMC Terrain is available for sale in Columbia.

Terrain carries over much of its features, entering its second year with nearly as much demand as it did when it first arrived to Columbia as an all-new model for 2010.  Two new colors are available on the Terrain, Steel Blue Metallic and Olympic White, while the available 264-horsepower V6 engine is now a Flex Fuel engine capable of running on blends of up to 85% ethanol and 15% gasoline.

GMC designers built exceptional versatility into the GMC Terrain, including the ability to travel nearly 600 miles on a tank of gas.  The standard 182-horsepower 2.4L Ecotec engine delivers responsive performance and an EPA-estimated 32 highway miles per gallon, allowing drivers to travel from Columbia to West Palm Beach, Florida, without filling up.  This exceptional efficiency on the highway bests even the Ford Escape Hybrid, even while starting thousands less.

Terrain offers Columbia drivers smart, purposeful technologies, including a standard rear view camera that displays in the rearview mirror (or on the navigation display of models so equipped) to provide added assurance while backing up.  Terrain also comes standard with a USB port, allowing drivers to control their iPod through the available Pioneer 8-speaker premium sound system.  Terrain also offers available features that were once exclusively the domain of larger vehicles, including a dual-screen rear entertainment system, touchscreen navigation system with a 40 GB hard drive for storing maps and music, power sunroof, ultrasonic rear parking assist, 19-inch chrome clad aluminum wheels, heated front seats, and a power programmable liftgate that can be set to only open partially for ease of closing or to avoid any low-hanging parking structures.

Standard safety options abound on the GMC Terrain in Columbia, SC, including six airbags, standard StabiliTrak stability control with traction control, anti-lock brakes, LATCH system for child safety seats, tire pressure monitoring, and the safety on OnStar with Automatic Crash Response.  In the event that your Terrain is involved in an accident where the airbags deploy, OnStar will be notified automatically and will attempt to make contact with you in addition to notifying emergency services of your exact location using onboard GPS technology.

Pricing for the 2011 GMC Terrain starts with an MSRP of $24,995 before taxes, fees, and any optional equipment.  2011 GMC Terrain crossover SUVs are available now from Jim Hudson GMC in Columbia, South Carolina.  Jim Hudson, the oldest GMC dealer in Columbia, SC, has been serving GMC customers since 1982, when it joined a budding Oldsmobile franchise at their original location of 7201 Garners Ferry Road.  A ten-time winner of The State’s Readers’ Choice poll, Jim Hudson prides itself on a commitment to complete customer satisfaction before, during, and after the sale.  Jim Hudson is located at 7201 Garners Ferry Road in Columbia, and can be reached by phone at (803) 783-0110.